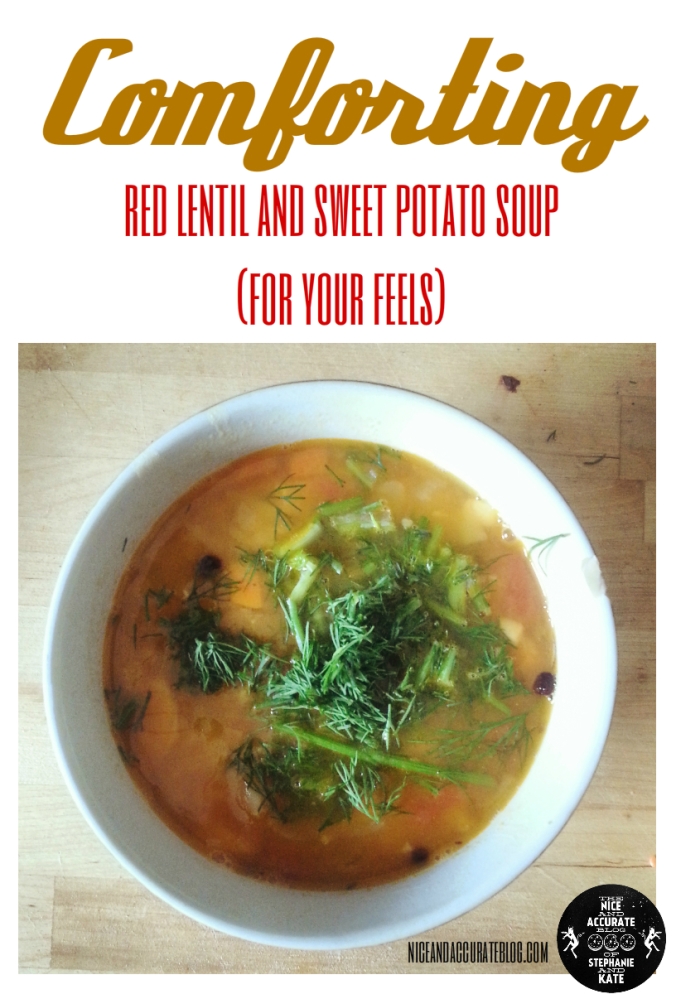 Okay, so, it’s fall again. Which means…. pumpkin spice everything! And all your favorite shows are back! And they’re all hurting you! A lot! You’re in extreme pain! So much pain and suffering, and so many feels… oh, and it’s cold outside. Well, this soup is pretty awesome for when you’re sad, sick, cold, emotionally destroyed, or just really hungry. It’s super easy to make, and pretty cheap too – lentils are ridiculously cheap, are easy to cook, and can be kept for a long time (stick them in the freezer before you use them, and make sure you wash them and check for rocks or other crap before using). Also it’s really pretty and all red/orange, so it’ll look super nice on the dinner table.

First things first, I’d like to note that this version is adapted from this stew recipe from The Garden Grazer. I’ve added more stuff, and it’s less stew-y and more soup-y. Not literally everything is necessary, and, honestly, it’s a soup, you can toss in almost anything and it’ll be fine.

This recipe is written for noobs, and, quite frankly, I’m no expert in writing recipes, so this should be easy enough to follow, but if it’s not, leave a comment and I’ll clarify I guess.

I used chicken bullion cubes , but if you’re going to use broth, make it four cups broth and two cups water.

Pick a pot that’s nice and roomy, and has space for everything you want to put in this stew. If you’re a noob at picking out pot sizes, just use the biggest one you can use comfortably. #YOLO

Personally, I thought putting roughly chopped fresh dill and fresh chopped scallions really rounded the soup out, but it would also go well with fresh spinach – just stir these things in like right when you’re about to eat them so they’re still fresh and cool and not like overcooked and slimy and gross.

Also, keep in mind, this recipe uses red lentils, which have a very short cooking time. If you use another type of lentils, like, say, green or something, you’d have to cook them for longer. Really, just like, taste them every ten minutes or so and when they are soft, they’re ready.

And boom, you’re done, and you have delicious super easy soup – as long as you don’t mind stirring stuff. It’ll fill you up, and it will fill your heart, and it will probably help you feel a little better as you sit in a dark corner, curled up in a shock blanket, weeping because your feels are in pain.

Let me know if you end up making this – I’d love to see the photos! Leave em below, or send us an Instagram or a tweet at @niceandaccurate 😉

Welcome to our blog! Apocalypse is currently being averted.